You know how every teenage girl’s AIM profile said, “.::DoN’t CrY BecAuSe iT’s OveR, SmiLE bEcauSe iT hApPenEd::.” (usually in relation to summer camp)? These are my exact sentiments after returning to reality after my week long “adult” Spring Break in Cabo with my friend, Shawn

We stayed at Hacienda Encantada, which is about 6 miles from downtown Cabo, on the Baja peninsula. We had a Master one Bedroom Suite and it was massive. Of course, I forgot to take pictures, but it was huge. There were two full bathrooms, a full kitchen (I used it to make Easy Mac one night), whirlpool tub, living room with a pull out couch, massive bedroom, and one of the biggest balconies I have ever seen. When booking, you have the option to add on the “Dine Out Privilege Plan”. This option includes all food and drinks at Hacienda Encantada and their sister resort, Marina Fiesta, downtown in the marina.  This plan also includes free shuttle service between the two resorts. Of course we chose this option and had 15 restaurants to choose from between the two sites. I could write an entire post about the food, but for times sake, I’ll tell you it was all amazing. I ate chips and salsa for breakfast and a bedtime snack every single day.

Although every meal was great , the most memorable was at La Trajinera Restaurant at Hacienda. We ordered melted cheese (along with another appetizer, of course) and I was ready to get my hands on some good queso. Our waiter warned us that it was a lot of cheese to which I responded “I can handle it”. They brought out what looked like a volcanic rock and made this queso at our table with flaming mezcal. It was nothing short of a performance, like it even had piano accompaniment. It was like Melting Pot on steroids without all the awkward small talk while the waiter makes your overpriced fondue. Of course, we ate every bite.

We frequented El Edén Tequila Bar every single night of our stay (except for the one night they were closed). The bartender, Sebastian, is now one of my favorite people.
I knew we would be friends when he offered me fresh chips and salsa. By our third visit he knew I wanted water and chips with salsa and pico every night and had them ready for me. Our last night, I let him surprise me with every drink I ordered and every single one was amazing. He even named a shot after me, the vamos_a_la_kya. He worked so hard, but was still able to carry on conversations with everyone at the bar. We were so sad to say goodbye on our last night and my nightly chips and salsa just isn’t even close to the same now that I’m back home.

While Sebastian holds a special place in our hearts, all of the staff and service at Hacienda was unreal. We had a note on the bed letting us know that if we needed a firmer mattress they would be happy to switch it out for us. As in, bring us an entire new mattress. Who does that? At the pool and beach, the umbrellas had service buttons on them that were connected to a FitBit-esque device on each servers wrist so they would be able to come help immediately. The entire staff made sure we had nothing to worry about while we were on our relaxing vacation.

We did take a break from relaxing on occasion and venture into downtown. Our first experience with downtown involved rainbow shots from Rips Bar. I honestly didn’t know these were a thing but it was $10 for 9 shots so, I just handed them my money. It was pure magic. We went back another time and they were $11 for 9 shots but we just split a round that time. The first few were kind of strong but the last ones barely tasted like alcohol. Not sure if they were weaker or if it just got easier as the rainbow progressed. Regardless, they’re recommended.

We went on two boat rides while we were in Cabo, both with Roger’s Tour Boat. He was so great. We just randomly chose him at the marina and he charged us $15 a person for a 45 minute ride. We went with him again on Friday for 2 hours where he took us wherever we wanted to go, offered snorkeling, and dropped us off at Lover’s Beach (where the  Sea of Crotez and the Pacific meet) and Divorce Beach (on the other side where the two bodies of water are separated) for an hour to spend on our own. Both times it was only the two of us on the boat and Roger was great. He had drinks for us and really listened to what we were interested in doing. His prices were great and he’s one of those people that when they take your picture they take like 20 from 4 different angles instead of just one. Those are the kind of people I want to give my money to.

When we got off the boat on Friday I ran into Waka Flocka, who was preforming that night, and called him “Mr. Flocka” to his face. We took this terrible picture and we later saw him getting one of those pedicure things where you put your feet in the fish tank. Added bonus to an already great day. 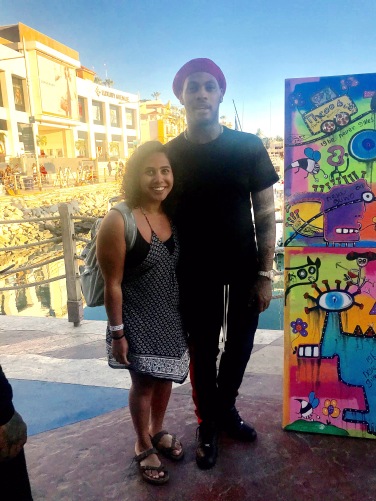 Our most adventurous escapade was hiking Mt. Solmar. I stumbled upon Mt. Solmar on TripAdvisor after we booked our stay. I was for sure apprehensive about doing it because this is not an easy hike. People described it as “rock climbing” at some points. It offers a full 360 view of Cabo that is unlike anything else. After watching a super annoying YouTube video of people not as in shape as we are successfully making it to the top and back, we decided we could do it. I would rate this hike as “harder than moderate but not even close to impossible”. Its really short, only took us 40 minutes to get to the top even when we went the wrong way at one point. The issue is how steep it gets. At some point you really are essentially rock climbing without a harness. We almost turned around before we reached the top because we had no idea how we would get back down since it was so steep. We decided to continue on so we wouldn’t be mad at ourselves later for not making it to the top. We were both so glad we finished and the view was crazy. I essentially scooted on my butt the first half of the journey down and it worked perfectly. Side note: Shoutout to Lululemon because I literally scooted my butt on so many rocks and there wasn’t even a single pull in my leggings and my backpack help up perfectly as well. Made me feel better about the stupid amount they charge for their stuff. Anyway, I recommend this hike if you feel comfortable doing it. It was worth it at the top, but not easy. There was a couple who did it in flip flops though, so maybe we’re just weak. Also, the bottom of the mountain is on private property and this nice man named Enrique allows you on his land to hike it. It is free, but he has tip boxes out for patrons to leave money for him and his dog training business.

I absolutely loved our stay in Cabo. There is not a single thing I would change, other than being able to stay longer. If (when) I return to Cabo, I will definitely stay at Hacienda Encantada again. The only possible turn offs (that didn’t bother me at all, but may bother others) are:

1. Everything there closes at like 10:30, but downtown also seemed to be dead by that point as well. They seem to prefer day drinking, which is fine by me.

2. The beach at Hacienda isn’t swimmable as it is on the Sea of Cortez and is very rocky and unsafe to swim in. There is a swimmable beach downtown if that is something you need and Lover’s and Divorce beach are also great. We both agreed that the view from Hacienda and all of their infinity pools more than made up for not having a swimmable beach and we would not change anything.

Cabo was everything I could have asked for and more for my much needed mental break from school and the real world. I can’t say enough good things about Hacienda Encantada and whole heartedly recommend it. I’m super picky about resorts/hotels, but they checked every single box and then some. I’m counting down the days until I can eat that melted cheese again.

View all posts by